The African continent has a steadily growing cryptocurrency economy that is being driven by remittance payments and devaluing fiat currencies.

This is one of the main insights from the region in the Chainalysis 2020 Geography of Cryptocurrency report that was released this week. The macro view of Africa’s cryptocurrency usage shows that the continent only accounts for just 2 percent of the global value of cryptocurrency sent and received over the past year.

The value of cryptocurrency sent and received by African users sits around $8bln respectively according to data from Chainalysis. An encouraging statistic shows that just 1.4% of the value sent and received has been linked to illicit activities.

Remittance payments are believed to be driving cryptocurrency usage in Africa due to the lower fees associated with cryptocurrency payments and the relative ease for individuals to send funds back to their home countries.

The Chainalysis report points to a 2018 study from Pew Research that suggests Sub_sharan Africa accounts for 8 of the 10 countries with the highest migrant populations over the past 10 years. Data shows that 25 million expatriates from Sub-Saharan countries have sent back $48 bln to their home countries in 2019 alone.

The report suggests that around $562 million worth of retail-sized payments under $10,000 were sent to African addresses from regions where African migrants are ‘well-represented’.

Meanwhile cryptocurrency payments between African countries is also believed to be providing a means for remittance payments that allow expatriates to side-step traditionally high fees going through conventional banking and forex transfer platforms.

Ray Youssef, CEO and founder of peer-to-peer (P2P) cryptocurrency exchange Paxful, told Chainalysis that Africans were actively using cryptocurrencies to send money to their countries of origin from within the continent.

“Some of our users in Africa are even building their own remittance businesses on top of Paxful. One guy I spoke to who lives in South Africa but is originally from Nigeria saw how hard it was to send money back home, and started a business where he would take cash from other Nigerian expats, convert it into Bitcoin, send it to someone 15 lost over 50% of its value Cryptocurrency mitigates currency instability in Nigeria via Paxful, and have that person convert it into naira and deliver it to the person’s family. Another woman living in Kenya has done the same thing, sending money back to people in Malawi,” Youssef was quoted in the report.

Another driving factor of cryptocurrency usage is the traditionally volatile nature of African countries’ fiat currencies characterized by their devaluation and instability. Chainalysis makes reference to the South African Rand losing 50 percent of its value against the US Dollar since 2010.

The rest of the breakdown is an interesting spread, with 10 percent of that being funds sent for illicit services, with more than half of that sent to scam operations. 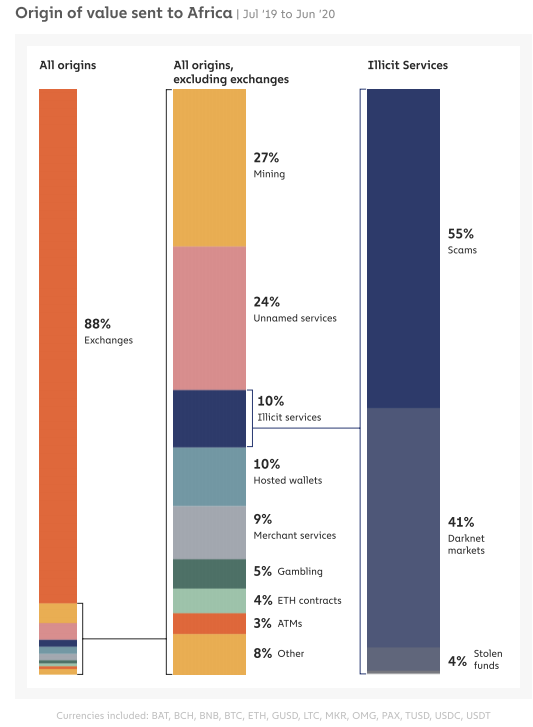 The Chainalysis report shows that Africa is on par with the rest of the world in terms of the share of the value cryptocurrency sent that is linked to illicit activities, if not slightly lower than the other regions in the report.

Nevertheless scams and darknet markets account for a large volume of illicit transactions sent and received from the African continent.

Gareth is a radio presenter and an award-winning sports journalist based in Johannesburg, South Africa. Away from his love of all things sport, he’s been covering the cryptocurrency and blockchain space since 2017.