Bitcoin has remained unperturbed in terms of price action over the weekend despite fresh fears of a Coronavirus second wave, with the king crypto changing hands around $9569 during press time.

The well-balanced battle between bears and bulls in recent weeks has left BTC inside a consolidation area, with the flagship cryptocurrency maintaining its bullish bias by holding $8,600 as its crucial support level.

Indeed, BTC’s price action over the past few weeks has been “boring” for many crypto traders. As a result of indecision in the equities market, BTC price has stalled in the lower levels of $9,000s since early June till now.

However, the recent consolidation has allowed the relative strength index (RSI) to tighten, forming a symmetrical triangle formation.

And now, Twitter user and crypto analyst BlackSawn0815 believes that the RSI suggests that a “price volatility spike” will happen today or tomorrow “at the latest,” with the indicator finally breaking out of that triangle after weeks of consolidation.

Prominent analyst Michaël van de Poppe recently took to Twitter to share his views on BTC, suggesting that that the top crypto is likely to break to the upside if it manages to sustain the “required support” above the $9,220 zone.

Similarly, Ki-Young Ju, CEO at CryptoQuant, argued that Bitcoin might continue its bull run by mid-July. The top analyst explained his upside bias by referring to an increasing amount of BTC withdrawals out of top exchanges.

Ju then cited a chart from earlier in the year showing average BTC withdrawals from exchanges. He has thus concluded that BTC will restart its bullish surge by mid-July, four months after the whales started withdrawing their BTC holdings from exchanges en masse. 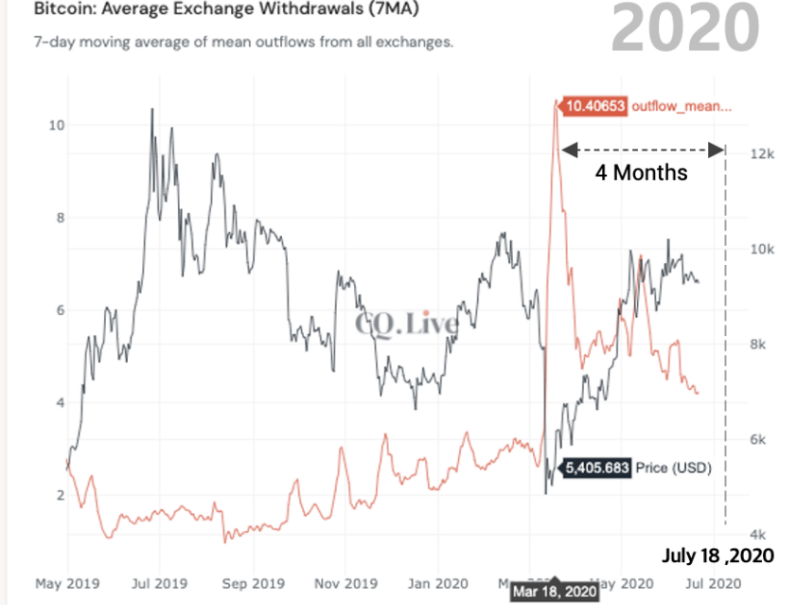 Bitcoin Price Could Surge Above $9,500

So with all the info presented above, what does the week ahead have in store from a bullish perspective?

In the past few days, BTC prices have remained stable with the flagship crypto seemingly forming a strong support base above the $9,220 zone.

Looking ahead, the bulls are likely to aim a test of the $9,500 resistance zone. That said, the signs look bullish for a push towards $9,500 and then $9,800 in the near term, judging from the recent trend line break and a positive BTC price action.

Reasons to be Positive About the Bitcoin Price this Week