The bitcoin price started the week on a positive note as it pressed higher from its Sunday morning lows. The digital asset has gained more than $400 in the past 24 hours to trade at $10,696. 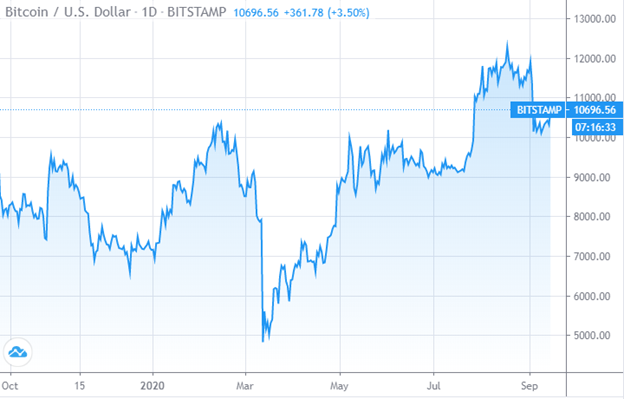 This impressive rally saw the bitcoin price break above a significant bullish trend line near $10,350 and finally surmount the stubborn resistance near $10.5K. The BTCUSD pair must now gain momentum above the $10,500 resistance to see an uptick towards $11K.

Despite the bitcoin price gaining just 2.4% in the past 24 hours, one analyst believes the current uptick may have legs.

Analyst Byzantine General explained that the recent bitcoin price correction allowed the asset to tap into critical liquidity zones around $10,300.The asset has now benefited from increased liquidity as buyers re-enter the market.

Adding to the prospects of an imminent bitcoin uptick are funding rates for short positions in perpetual futures markets. Negative funding rates are now prevalent in the BTC market due to intense selling pressure on derivatives platforms.

Finally, the ongoing rally in the legacy market that saw the NASDAQ jump by 2% could help the crypto market recover.

ETH Bulls Are Comfortable Above $370

The ETH price is currently comfortably above the $375 level of support. The altcoin broke the $375 resistance and pushed higher, but was unable to surmount intense resistance near $390.

ETH now trades at $377 during press time, marking an inspiring uptick of 11.5% in the last seven days. The surge is attributable to the return in confidence towards ETH mining, highlighted by a 2-year high in the ETH hash rate.

As per data from on-chain analytics firm Trustnodes, Ethereum’s hash rate spiked up to hit nearly 250 terahashes per second (TH/s). Mining activity hasn’t reached this level since 2018, where it neared 300 TH/s.

The high hash rate also comes in the wake of the exploding DeFi sector, which seems tolerant of high transaction fees on the ETH network.

U.S. ‘Crypto’ Presidential Candidate served with a class-action lawsuit at his Rally