BTC Price Shoots Past $13,700 Amid Influx of Buying Volume

BTC continued rallying higher in today’s sessions despite fears that it was nearing its peak. The digital asset began its latest leg higher a few hours ago, climbing as high as $13,650.

Since then, BTCUSD has gained a further 0.7% on the hourly charts to change hands at $13,704 during this article’s publication. The king coin is now up over 6% in the past 24 hours after retracting to lows of $12,800 during yesterday’s stock market plunge. 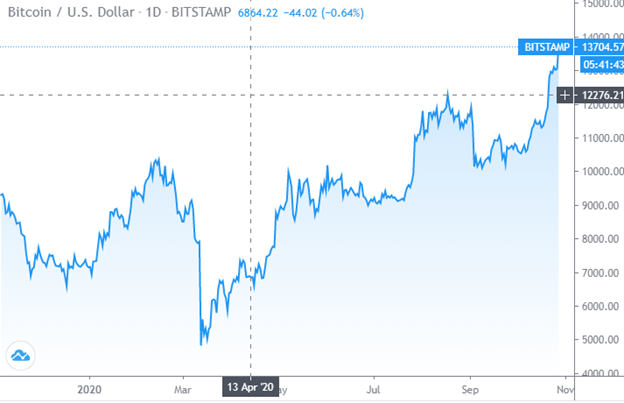 The flagship crypto’s push to a new year-to-date high is attributable to a rush of buyers into the market. Bloomberg also attributes the uptick to the influx of institutional money into the BTC market, along with PayPal’s recent entry into the crypto sphere.

BTC is currently just a couple of hundred dollars shy of the $13,851 high set in June 2019. The coin is fast approaching price levels not seen since the burst of the crypto market bubble in 2018. Many traders will now be watching to see if BTC can rally past the two-year highs at $13,950.

One analyst is urging traders to remain cautions, even as BTC climbs steadily and looks ready to confirm a bull market.

According to Cole Garner, BTC is approaching a “hell candle” that could end the asset’s ongoing uptick and possibly cause a retracement.

Garner predicts that if the BTC markets register one more “leg” up, then the bears could send prices plunging back down in the near term.

The analyst shared the chart below displaying an indicator that has appeared twice in the past. In both occasions, the candle arrived after BTC flipped a key resistance level into support.

So far, BTC has remained strong despite a sinking stock market, soaring Covid-19 cases, and an upcoming US election.

Therefore, traders will have to wait and see whether the rally will continue into the New Year, or if the upcoming hell candle will rug pull investors.

As per data from CoinMarketCap, the second-largest digital asset is up 5.22% at publication time. The ETHUSD pair saw a sharp decline yesterday as it broke the $400 support and traded as low as $385.

The altcoin has since recovered above the $400 and $395 support levels. ETH even attempted to clear the $410 resistance but failed, leading to the price retracting to $406 during press time.

Bitcoin Breaks $19,000 and Could Keep Rising Thanks to These Factors

Bitcoin Breaks $19,000 and Could Keep Rising Thanks to These Factors

ETH Breaks $600: Could a Retest Of All-Time Highs Be Imminent?