BTC has now dropped by 16% from its yearly top, indicating that demand for the coin is declining under pressure from a rising US dollar.

Some BTC chart watchers have now turned increasingly bearish concerning BTC’s near term outlook. For instance, analyst Josh Rager commented about the inability of BTC to break a key resistance. He noted:

“I want to see Bitcoin back above $10,600 before I start to feel good about it. Traditional markets will likely continue to have a strong influence on BTC and the direction it takes.”

For the first time since April, a Bitcoin momentum measuring tool has flipped bearish on the weekly timeframes.

The Moving Average Convergence Divergence (MACD) indicator measures how overbought or oversold an asset is. An analysis of the divergence on the two moving averages in the chart below indicates that the BTC price could correct lower.

The MACD tool projects that the $10K will fail to hold, triggering a more profound correction ahead. Despite this gloomy outlook for the BTCUSD pair, Standpoint Research Founder Ronnie Moas offers an exciting perspective.

Moas argues that the dollar will probably lose 50% of its value within the next two decades. On the contrary, he projects that BTC’s value will likely increase by at least 1,000% in that period.

He thus urges investors to take their fiat and purchase BTC since the digital asset’s long-term prospects remain bullish.

ETH is struggling to recover from heavy losses seen yesterday. The altcoin slipped below $345 resistance level and now shows signs of continuing lower below $330 unless it recovers above $355. 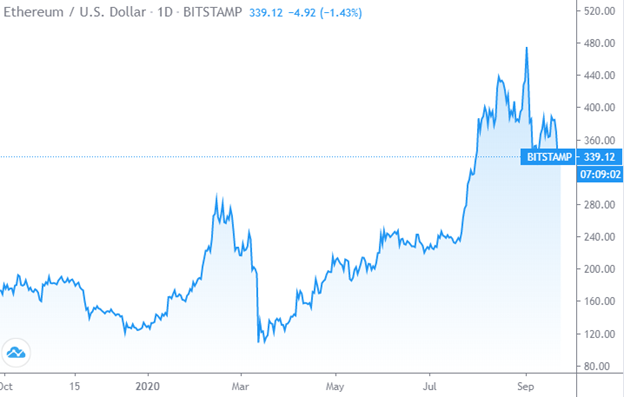 The ETHUSD pair is trading at $339 during press time, which is slightly higher than the new weekly low seen yesterday at $331.

If the bulls manage to kick start a fresh recovery wave, ETH likely to face hurdles near the $350 resistance level. A successful close above this resistance could further push the ETH price higher into the $365 and $370 levels.

Reasons to be Positive About the Bitcoin Price this Week

Stacked Secures Seed Round with Alameda and CoinFund