Dogecoin is amongst the biggest double-digit gainers in the last 24 hours as the markets see what could be the beginning of altcoin season.

At the time of writing, DOGE’s price is $0.002755, which is up by about 17.84% since yesterday, indicating a trend that has seen most top altcoins such as XRP and BSV turn green in today’s sessions. 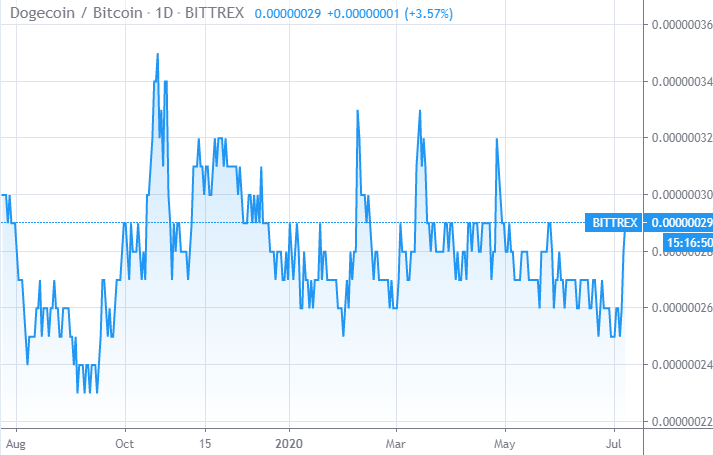 Dogecoin recently went through a consolidation period in which it traded tightly between the upper range of $0.0024 and the $0.0025 resistance. However, indicators now show that DOGE will be on a steady rise in the next trading sessions.

DOGE often performs best when BTC/USD enters a consolidation period, which is currently the case. A sustained price above $0.0025 should be seen as a leading bullish momentum indicator in the near term.

Ethereum (ETH) has shown some remarkable signs of strength after posting a full recovery yesterday.

The top altcoin is now trading within the $230 – $250 trading range initially formed in May of this year, pointing to underlying strength among its buyers.

At the time of writing, Ethereum is trading up approximately 4.52% at its current $237.54. This marks a massive uptrend from daily lows of just over $220 in yesterday’s sessions.

This remarkable surge was seen in tandem with the second-ranked crypto printing a bullish signal at its monthly pivot, according to crypto analyst ‘CryptoSays.’

Now that the crypto is trading back above the lower boundary of its long-established trading range, buyers may attempt to test its upper limit, where the price is likely to face selling interest near the $240 level.

A successful break above the key resistance near $244 will likely pave the way for a strong surge towards the coming sessions’ $250 mark.

BCH is currently in a sharp uptrend after blasting through $230. For the most part, BCH/USD has been following the entire altcoin market’s steps, which seems to be seeing a resurgence since yesterday.

On July 6, a massive surge from $221 to $236 confirmed a daily BCH uptrend. Bulls were able to hold a higher low at $215.82 in overnight trading sessions, and the fifth-largest crypto as per data from CoinMarketCap is now comfortably trading at $238.13 during press time.

Grayscale’s Ethereum Trust set to be an SEC reporting company

Lightning Network Still Prone to Vulnerabilities, According to New Research

Dogecoin to Hit $1 Thanks to TikTok? The Ultimate Pump Scheme

Grayscale’s Ethereum Trust set to be an SEC reporting company

Are you sure want to cancel subscription?