Ripple CEO Brad Garlinghouse has vowed to fight against an expected lawsuit from the United States Securities and Exchange Commission.

According to reports from Fortune and the New York Times, Ripple is expecting the SEC to file a lawsuit against the company for selling unregistered securities relating to the sale of XRP tokens to investors in America and abroad.

Ripple’s XRP is the third most valuable cryptocurrency by global market capitalization according to data from Coinmarketcap.

According to the reports, Garlinghouse had been informed by the SEC of their intent to file a lawsuit against the company sometime this week. It’s understood that Garlinghouse and Ripple co-founder Chris Larsen will be listed as defendants in the case.

XRP, like many other cryptocurrencies, has enjoyed a prosperous 2020 with its value and market capitalization doubling over the past three months. However the news of the impending lawsuit has seen the price of XRP drop as much as 15 percent on the markets. 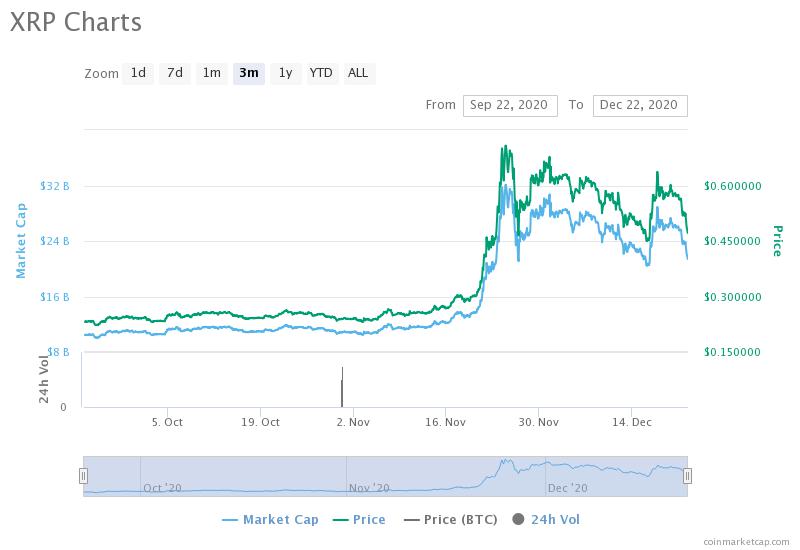 The SEC is responsible for overseeing the American stock markets and options exchanges and has stringent rules for the space. Securities offerings play a major role in allowing companies to raise capital but they are also carefully controlled by the SEC.

A few years after Bitcoin’s inception, cryptocurrency and blockchain projects like Ethereum paved the way for what is now known as initial coin offerings (ICOs). Many of these ICOs are actually subject to the SEC’s securities laws as their tokens are often deemed to be Securities using the Howey Test – which determines if a transaction actually represents an investment contract.

XRP has been subject to this very conversation for some time, much like Ethereum was in the crosshairs of the SEC before it was eventually deemed to not be a security in 2019. It looks as though XRP is not being treated the same way.

In a three-Tweet thread on his personal Twitter account, Ripple’s CEO Garlinghouse described the SEC’s actions as an ‘attack’ against crypto and criticized outgoing Chairman Jay Clayton of ‘picking winners’ and ‘trying to limit US innovation in the crypto industry’ to Bitcoin and ETH alone.

Garlinghouse went on to state that cryptocurrencies and blockchain technology are well established and that Ripple will continue to use XRP, describing it as the best digital asset for payment given its speed, cost, scalability and energy efficiency. The CEO vowed to contest the lawsuit as well.

“The SEC – out of step with other G20 countries & the rest of the US govt – should not be able to cherry-pick what innovation looks like (especially when their decision directly benefits China). Make no mistake, we are ready to fight and win – this battle is just beginning,” Garlinghouse wrote.

Gareth is a radio presenter and an award-winning sports journalist based in Johannesburg, South Africa. Away from his love of all things sport, he’s been covering the cryptocurrency and blockchain space since 2017.

CoinFlip Holds up Dogecoin Across Its Network of 1,800 ATMs in the US

CoinFlip Holds up Dogecoin Across Its Network of 1,800 ATMs in the US

Is the NFT Craze Just Like 2017’s ICOMania? Charlie Lee Thinks So